Jeremy Bock is a West Virginia native and technologist currently expatting Bangkok with his wife and daughter. His novel, Caroline, is independently published and available on Amazon and Apple Books. Short stories are released on social media on Twitter @jbockcet, Instagram @jbockwrites and on Facebook (facebook.com/jmbockwrites). His newest short story, Permission, is available now at jbockwrites.com/permission.

Hi all! I’m Mel Reynolds and I’d like to tell you about Jeremy Bock. I know Jeremy through his participation in the Morgantown writers group, but he has also helped update the Metaworker site in his capacity as a professional web developer twice now. He works remotely with West Virginia University’s Center for Excellence in Disabilities. His behind-the-scenes work is appreciated, so when the opportunity arose for The Metaworker to interview him about his writing and also help him spread the word of an organization he supports, we gladly took the chance.

Through Jeremy’s most recent self-published short story titled ‘Permission,’ he became involved with the AB Azimi Foundation. The illustrator (who wishes to remain anonymous) of his story has personal ties to the foundation. He says, “The Foundation has helped acquaintances of [the illustrator’s] and AB is a personal friend of theirs.”

Jeremy went on to explain that “the AB Azimi Foundation is a registered non-profit in Afghanistan whose mission is to help the most impoverished in the nation by providing food, baby formula and basic life necessities. The Foundation is mostly funded by the founder, Abdul (AB) Azimi, an Afghani entrepreneur. He’s requesting donations specifically for Naan Program which distributes nearly 3000 naans in the poorest neighborhoods of Afghanistan’s major cities. Their efforts are now centered on relief for victims of the earthquake that struck on June 21, 2022, killing over a thousand people in the affected area.”

According to the Washington Examiner, efforts to help families in Afghanistan have been severely affected by the war in Ukraine, and unfortunately, AB Azimi Foundation has not escaped the negative impact. Jeremy is doing his best to spread the word about this foundation and has used his most recent short story to help promote their GoFundMe account. The Washington Examiner assures its readers that the AB Azimi Foundation is “assiduous about allocating donor funds to aid.”

Jeremy’s  focus right now is promoting his latest short story, Permission. He says: “It’s a 10 minute read about two lovers coping with a forced quarantine after they broke the State’s emergency decree in response to the pandemic. Set in fictional Bangkok, Thailand, Kal must navigate the bureaucracy to reunite with Ellena and save their troubled relationship. I wrote it after a look into real surveillance technologies used during the COVID-19 pandemic and experiencing my own issues navigating the bureaucracy of international travel trying to get home to Thailand with my family.” 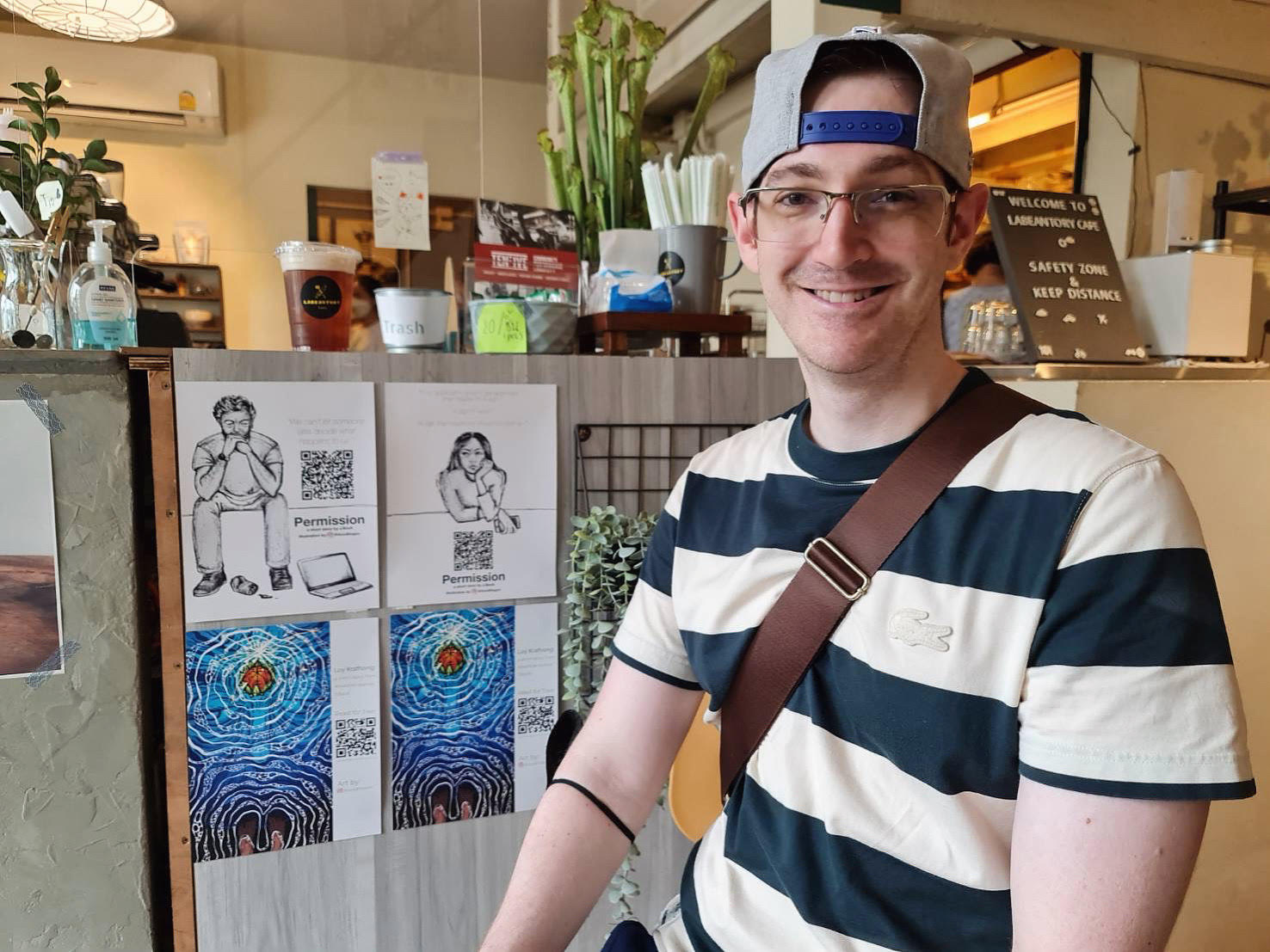 Jeremy is not new to writing. When he was a fifth grader, he entered a creative writing contest and won. He was surprised that other people could find his “ridiculous daydreams entertaining” but maybe more importantly, he realized that he had “a knack for it (writing) and could communicate in writing way better than… thinking on the fly and talking.” I suspect many writers feel the same way and can relate. He makes another relatable point about growth as a writer when I asked what advice he’d give to his younger writing self. He would have told himself: “Share your writing with others who write more and are better than you as soon as possible. Don’t fear criticism and actually listen to them. Then apply what you learn. Do this now and continue to do this forever.”

Jeremy has had time to grow and learn as a writer and has developed his own methods, as many writers do. To stay focused, he needs to have noise canceling headphones and when asked if he’s more of a plotter or fly-by-the-seat-of-the-pants type of writer, he said, “Generally I’m a mix of both. I’m definitely an outliner. I know ahead of time the aesthetic, the general plot and what I want to express. But I’m not so rigid that I don’t let the stories drift. I generally come up with a concept and theme I want to express and wrap a character and situation around it.”

In our discussion on the writing process, he shared his thoughts on writer’s block. Some writers don’t believe in it, others swear that it is an insurmountable obstacle. Jeremey said, “I believe in writer’s demotivation. You have to be relentlessly creative to write consistently or write something as long as a novel. Very few people make a living at creative writing, so for most, myself included, it’s hard for me to write consistently knowing there’s no pot of gold at the end. It takes time and energy to write something good and as a working adult with a family and a mortgage, sometimes I have little of either to spare.

“I think I believe more in the opposite of a block–the muse. Maybe the natural state for me is in writer’s block, but when inspiration strikes, I have to write. I can force myself, sure, but when I have something that I deem good in me, I have to purge it from my imagination. Then like I’m possessed, I manage to make the time and have the energy.” I agree with his take on writer’s block and think it is a more positive take on the obstacles many writers face. It’s not about what can go wrong, but rather honoring and acting on inspiration when it comes.”

When asked what resources for writing he had for learning more about the process he said, “I’m not a good student when it comes to creative writing. Everyone should probably read Steven King’s On Writing, but I assume most people reading interviews like this probably already have. Everyone learns differently. I learn more by doing and then getting feedback and applying.” 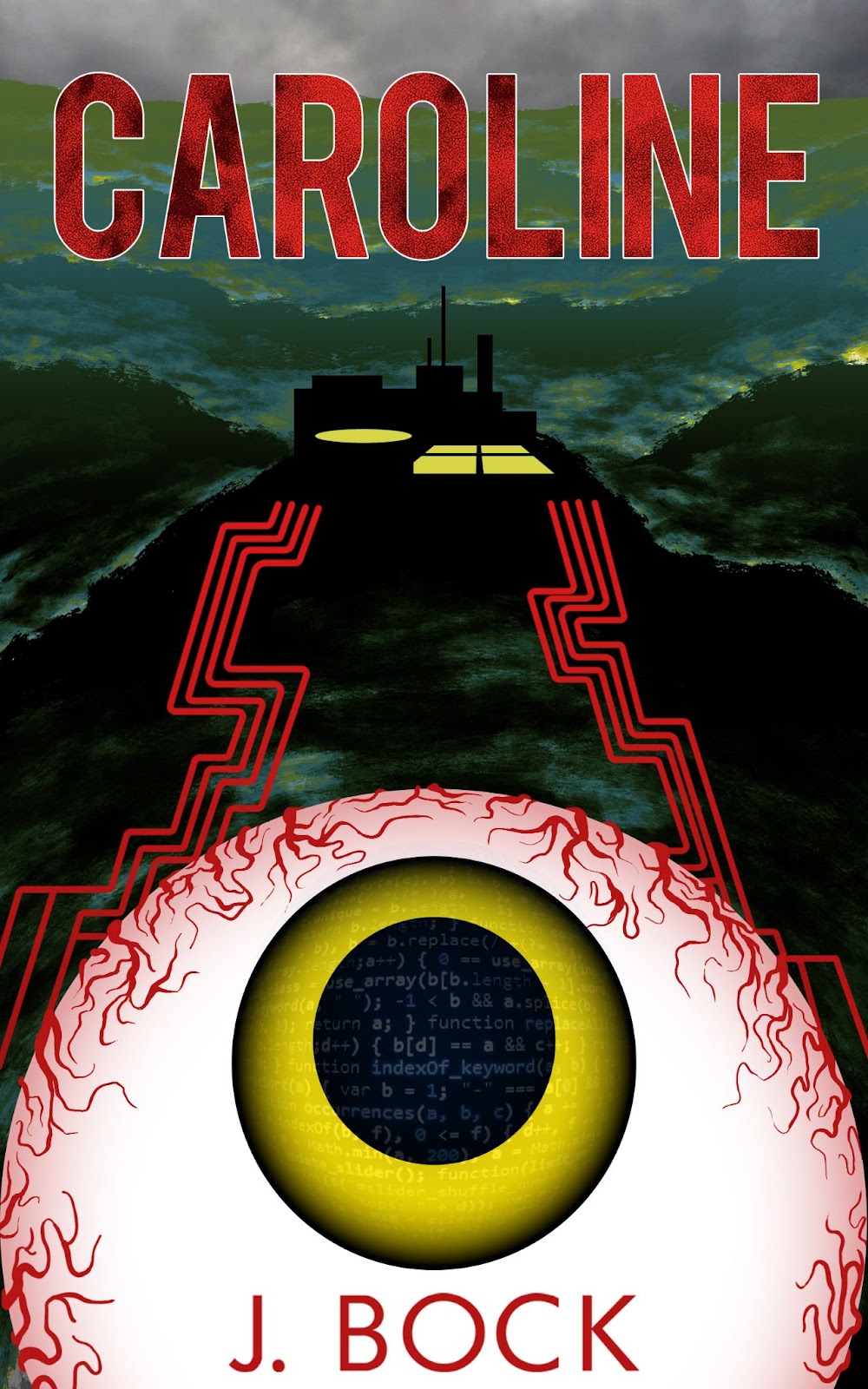 He gives a great overview of what his novel is about: “Caroline is a character-driven science fiction thriller set in near-future West Virginia. It’s a thought experiment on how real, meticulously-researched emerging technologies could affect the lives of those living in a dystopian setting that will feel familiar to today’s real world and is as much of a character as the protagonist, Levi.

“Levi is an everyman. He’s an engineer working at a modern oil and gas energy campus who is less concerned about the larger world around him, and more concerned about getting to that barely deserved beer at the end of his workday. His job at the Energy Alliance isn’t all bad, though. He’s got a nice trailer up the mountain from the company town and normally, he has enough script [the story’s monetary system] to survive to his next payday. He’s also got friends and a boss that doesn’t micromanage. Even that cute girl in IT is giving him signals. He thinks.

“But the natural gas on campus is drying up, and more jobs are lost to automation every day. When the AI-fortified control systems that govern every operation on campus are hacked, the same pipelines Levi designed years ago rain fire onto his home, workplace and the people he’s come to care about. He needs to mourn, but with his digital signature found on the commands that issued the campus-wide destruction, Levi’s been branded a terrorist. While evading the Energy Alliance’s private militarized law enforcement, he must find proof of his innocence or he’ll surely be hung.”

I asked Jeremy which part was the most fun to write and he admitted that he would like to say all of it. “I’m a computer engineering technologist, so interviewing oil and gas engineers to come up with conflicts and world building of the campus was a lot of work, but a big payoff when I got great feedback from those in the field. Dialogue is also fun for me in everything I write. I feel character differences and subtleties can really come out when you give added weight to the words people say and what they don’t.”

I was curious if he related to any of his characters more than the others. I imagine such a question is akin to asking a parent which child is their favorite, which in turn made me smile and think his answer was similar to how most parents would reply. “Again, not a cop out, but I want to say all of them. Each character I created had to come from some aspect of my own personality that I had to explore. I think Levi’s inner voice and tendencies are very similar to my own. The novel is written in first person perspective so I think that happened organically, but of course Levi’s words and actions were steered by how I wanted to depict his motivations, not my own.”

He has more in store for Levi, but is not sure what form that’s going to take yet. “I’ll certainly share when ready.” So be sure to follow his social media to see any announcements he makes about a potential sequel or to read future short stories when he shares.

Finally, I asked Jeremy what book or author he would recommend and why. He said, “I think anyone who wants to write should read their genres to see what the market deems “good” and what audiences generally expect. As my interest is mostly in science fiction and technology, that’s what I stick to. I’ve read nearly everything Cixin Lieu has written, and anyone interested in sci-fi should as well. Currently I’m reading AI 2041: Ten Visions for Our Future by Kai-Fu Lee and Chen Qiufan, as short stories have piqued my interest. If you’d like to support someone in the indie space then I recommend Alexis Lantgen’s collection of shorts called Sapience.”

I want to take a moment to thank Jeremy for answering my questions and for all the work he did on The Metaworker’s website. I have had the pleasure of reading and commenting on his work in the Morgantown Writers Group, so his answers ring true because I have seen him apply all that he has said to his own writing.

If you would like to join Jeremy in supporting the AB Azimi Foundation, follow the GoFundMe link. Or if you are unable to financially contribute at this time, please share his short story, “Permission”  on your social media accounts to raise awareness.

Thank you for taking the time to read about Jeremy and his ongoing projects. It’s been a pleasure telling you about his work. I hope you have a great day/evening/week. May your pens never run out of ink, your drinks always be the right temperature, and your muses never fail to inspire you.

This site uses Akismet to reduce spam. Learn how your comment data is processed.